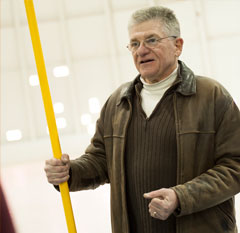 As with many entrepreneurs, Settembre has worked tirelessly on developing his products—high-efficiency tools that remove snow, water, and sludge—and plays many roles to bring his creation to the marketplace. “I have all the corporate functions of any-sized company,” he says. “It’s almost impossible for a single person to do all these functions without spending a ton of money and having other people do it.”

So when an opportunity arose for Settembre, who has a disability due to a spinal condition, to have business consultants review his operation, he took it. The consultants were a team of Syracuse University students in the spring 2012 Inclusive Entrepreneurship Consulting course, jointly taught through BBI and the Martin J. Whitman School of Management. Student teams work with entrepreneurs, who have diverse disabilities, to evaluate their business needs; develop a plan that meets those needs in such areas as marketing, operations, and accounting; and submit a final, formal consulting report to faculty and the entrepreneur.

In its fourth year, the course, which won a Chancellor’s Award for Public Engagement in 2010, has enabled 125 students to work in student consulting teams with 24 entrepreneurs. “The entrepreneurs are gaining access to talented consultants for free and getting support from individuals who are very interested in what they are doing,” says adjunct Whitman faculty member Gary Shaheen G’86, who is director of employment policy for the Institute for Veterans and Military Families at SU. Shaheen, formerly a BBI senior vice president, developed the course with Whitman faculty during his time at BBI.

“Students are learning new ideas about entrepreneurship and being challenged to think if there really is such a thing as ‘disability’—or is it something that we can eliminate by changing the environment and expanding opportunities when it comes to entrepreneurship.”

Students can see how people with different abilities have developed other abilities to compensate and excel—making a disability irrelevant, Settembre says. “The only real obstacles to our progress and self advancement are usually located in our minds,” he says.

Simon Choi G’12, an accounting major and one of the five students working with Settembre, had his own shift in thinking during the course. “I had thought people with disabilities were citizens who we needed to provide assistance to, but their point of view is that they just see the world differently—and that’s why there’s opportunity for them,” Choi says. “That was the wow factor for me.”

The course developed through a grant from SU’s Campus-Community Entrepreneurship Initiative (Enitiative), funded by the Ewing Marion Kauffman Foundation, and the work of Start-Up NY. A partnership between BBI, the Whitman School through its South Side Innovation Center, and Onondaga County, Start-Up NY assists entrepreneurs with disabilities in Onondaga County gain access to business development resources.

BBI and Whitman have a history of collaboration with such programs as Whitman’s Entrepreneurship Bootcamp for Disabled Veterans, says Whitman Senior Associate Dean Randal Elder, who was involved in the course’s development. “We have long recognized that entrepreneurship is a source of opportunity for those with disabilities, and this course allows our students to assist these entrepreneurs and learn more about their challenges and opportunities,” he says.

For entrepreneur Linda Erb, who has cognitive difficulties and worked with an earlier class, the consulting students surveyed merchants who might be interested in using her online retail store, OhGoodyGoody.com, which sells gift certificates to local businesses. “The foot work they did and the ground work they laid out is still opening doors for me,” Erb says.

Settembre opened his books and gave the students his formal business plan for Way Cool, which he launched in 2010. The student team, made up of Xibei Cao G’12, Amit Chaudhari G’13, Choi, Wenyuan Li G’12, and Andrew Serota G’13, pored over his books, scrutinized his plan, and reviewed his product and assembly process. His initial creation, the Roof Blaster, a long-handled tool with a metal blade and squeegee edge to push and pull snow, has since inspired his other creations—the Sidewalk Blaster, Rink Blaster, and Waste Blaster.

The team, which presented its plan to Settembre and the entire class at the end of the semester, made suggestions in the areas of operations, financing, and exploring new markets. The students also created a Facebook page, Twitter account, and other new ways of marketing his products.

The course is increasingly attracting students from diverse academic backgrounds who bring a range of various interests and skills, which enhances the final plan for the entrepreneur. Serota, who is a College of Law student and hopes to start his own business one day, saw the course as a way to learn about building a business but was inspired by much more. “I always thought starting a business was challenging enough, let alone trying to overcome some sort of physical challenge,” Serota says. “Rich sees it not as a crutch or a problem to overcome, but just as trying to take charge of his life.”

Settembre, who taught special education and took coursework with Burton Blatt in the School of Education, wants students to realize anything is possible. “If you are laid off, if you get sick, or if you are just impassioned about an idea, there is opportunity to pursue your idea,” he says. “I tried to convey to them I have certain advantages, because sometimes having a physical disability changes your mindset. It makes you push harder.”