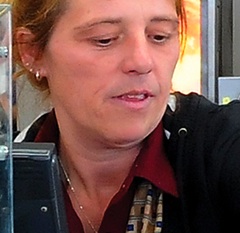 One of the clearest measures of the program’s success comes in the recent employment figures. Among those enrolled in Real JOBS NY during the 2009-2010 period, 64 percent were employed at least three months after being placed in a job. The national average for similar programs is only nine percent.

After a lifelong battle with alcohol addiction, Yvonne Lescault’s life hit a low point in 2009: she temporarily lost custody of her young children and became unemployed. “At the time, I never dreamed my life would come to this. I had no money; I didn’t know where I was going to get my next meal,” she says. Today, Lescault has a new outlook. She credits the Real JOBS NY program with helping to rebuild her life.

“I finally have a job and my kids are living with me again,” says Lescault, a Hudson Falls, New York, resident who now works as a McDonald’s manager. “When I started the Real JOBS NY program, I didn’t have any idea how to write a resume or use a computer.”

The program assists people with diverse psychiatric disabilities, including depression, substance abuse, and anxiety, overcome barriers that stand in their way to employment. “Without the appropriate people to guide you along, finding a job seems like an impossible task for someone in my shoes,” she notes. “I now realize how important having a stable job can be to the quality of your life.”

To develop a pathway to sustainable employment, Real JOBS NY provides a unique support system for its participants, focusing on individually tailored plans to meet the specific needs of each client. Lescault is one of approximately 80 people who have been placed in jobs after enrolling in Real JOBS NY—a collaboration of the Burton Blatt Institute (BBI), Workforce Development Institute (WDI), and the New York Association of Psychiatric Rehabilitation Services.

One of the clearest measures of the program’s success comes in the recent employment figures. Among those enrolled in Real JOBS NY during the 2009-2010 period, 64 percent were employed at least three months after being placed in a job. The national average for similar programs is only nine percent.

The difference between Real JOBS NY and other workforce development programs is the one-on-one attention, individualized case management, and referrals to other services that help clients achieve employment goals. “My vocational counselor helped me with everything from computer skills to finding transportation,” adds Lescault. “She even showed me the appropriate steps to get a high school diploma.”

The location of the program also matters. Real JOBS NY, funded by the U.S. Rehabilitation Services Administration “Projects with Industry” grant, is based out of Schenectady County Community College and SUNY Adirondack. “The community college environment is highly appealing to people with psychiatric disabilities who are seeking employment assistance, because it is less stigmatizing to those who have tried and failed in a traditional mental health center,” explains Stephen Traver, WDI director of vocational services.

Lescault, who was referred to the program through family court, admits she reluctantly sought out Real JOBS NY. She had a change of heart after her first meeting with Alice Huntington, a vocational counselor for the program. “During our initial conversation, I realized the program was a perfect fit for me,” Lescault says. “My life continues to improve. I even bought my first car. People today can’t believe the situation I was in just a few years ago.”

Residents of Albany, Schenectady, Saratoga, Warren or Washington counties who are interested in the program, should contact Stephen Traver at straver@wdiny.org or (518) 272-3500.