The Cambridge University Press is proud to announce the release of eQuality: The Struggle for Web Accessibility by Persons with Cognitive Disabilities written by Dr. Peter Blanck, Ph.D., J.D.  The book will be formally released at the Fourteenth Annual Conference on Cognitive Disability and Technology. 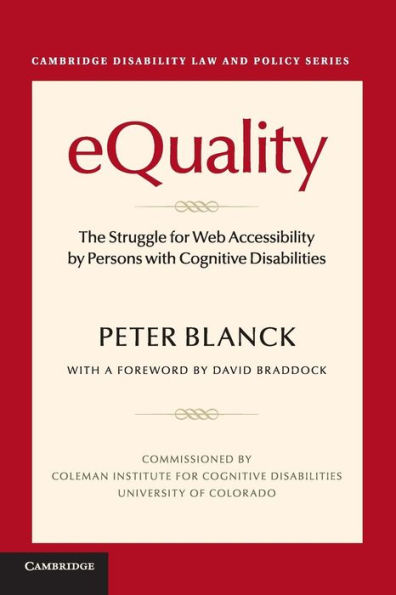 Commissioned by the Coleman Institute, this exceptional book examines the rights of individuals with cognitive disabilities to equal access to web content protected under law. Dr. Peter Blanck will give a presentation on the book and be on hand to sign copies of eQuality distributed at the 2014 Coleman Institute Annual Conference on Cognitive Disability and Technology.

At its 2013 meeting, the assembly of the Coleman Institute adopted a Declaration of the Rights of People with Cognitive Disabilities to Technology and Information Access. The declaration recognizes that people with cognitive disabilities are entitled to full and equal inclusion under law, which includes the right to web eQuality. This means the opportunity to use and comprehend online information to promote independence and self-determination in support of individual security, privacy, and dignity. The pronouncement calls for achievement of web equality with all deliberate speed.

The seeds for my work on web eQuality, and my subsequent book — eQuality: The Struggle for Web Accessibility by Persons with Cognitive Disabilities (2014, Cambridge Press, commissioned by the Coleman Institute) — was planted years ago by Dr. David Braddock, who asked me to examine “The right under the Americans with Disabilities Act to web access for people with cognitive disabilities.” Given the ubiquity of networks in the United States and most of the world as well as the shifting of nearly all of our daily interactions and activities to networked spaces, the question of the right to web equality, especially, from an ethical and moral stand point may seem an obvious, “Yes, of course!”

However, setting the rights of individuals has seldom come without some kind of enshrinement under law and requisite shifts in attitudes and understanding, and practice. Web equality as articulated by the declaration, therefore, must be further defined, detailed, and decided not only through legal actions but also, and perhaps more importantly, through cultural actions. In eQuality, I have examined assumptions underlying the full and equal enjoyment by people with cognitive disabilities towards the common understanding of web content. The book explores how web content equality is grounded in law and policy that may help people with cognitive disabilities to fully partake and flourish in the information age. To that end, this book traces the struggle for web equality by people with disabilities; but also it introduces definitions, techniques for inclusion, and legal challenges and rights.

The declaration likewise moves us towards resolution of the particular struggle for web equality by persons with cognitive disabilities. As this struggle is examined closely, it raises important questions that must be answered to ensure the general shift to web content equality. At bottom, however, the rights of individuals with cognitive disabilities to equal access to web content are not only protected under law, but also must be implemented and supported by current user-based, semantic and cloud technologies. Moreover, consistent with the Americans with Disabilities Act and the U.N. Convention on the Rights of Persons with Disabilities, web content equality must be defined through functional, rather than disability-specific, approaches to enable personalization and customized usage across online functions. Legal challenges brought forward by individuals with cognitive and other disabilities — many of which are discussed in eQuality — illustrate barriers faced by individuals with cognitive and other disabilities to web equality as well as some of the outcomes from these challenges.

Twenty-five years ago, Tim Berners-Lee, the inventor of the web, understood that the web maintains its participatory integrity when its content — its meaning and use — is open to all. This is what the self-advocates seek through the declaration. Not to stymie web operations, market penetration, and creativity, but rather to have the full and equal choice to partake online in the same ways as do others. Surely, web content equality stimulates the free market just as it does free speech. Choice to participate does not sacrifice the voice of the minority; it embraces it.

The question then we must ask is not what the world would be like without web content equality, but why we would choose to live in a world without it. Web content equality as envisioned by the declaration supports the liberties of independence and dignity, and the opportunity to participate in the human endeavor. With continued resolve, we will approach web eQuality, and this is bound to lead us all towards greater freedoms and individual flourishing.

Peter Blanck Ph.D., J.D., is a Professor at Syracuse University and the Chairman of the Burton Blatt Institute.