May 6, 2019
On May 12, 2019, Burton Blatt Institute (BBI) Chairman Peter Blanck is featured on “Story in the Public Square” a public affairs television series and podcast. The Telly Award-winning PBS and SiriusXM Satellite radio show is co-hosted by Jim Ludes and G. Wayne Miller. Story in the Public Square is a weekly podcast brought to listeners by Salve Regina University’s Pell Center for International Relations and Public Policy. It features interviews with leading print, screen, music and other storytellers about their creative processes and how their stories impact public understanding and policy. Story in the Public Square’s messaging aligns with the BBI’s vision for accessible communities fully including persons with disabilities.

Listen to the show 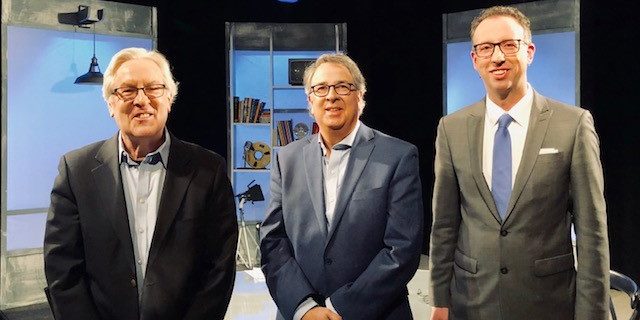 On the show, Dr. Blanck discusses his experiences as an advocate for people with disabilities. In addition to being Chairman of the BBI, Blanck holds the highest-ranking title of “University Professor” at Syracuse University. He also is Chairman of the Global Universal Design Commission (GUDC), and President of Raising the Floor (RtF) USA. Blanck has written over 200 articles and books on the Americans with Disabilities Act (ADA) and related laws, and received grants to study disability law and policy. He is a former member of the President’s Committee on Employment of People with Disabilities, a former Senior Fellow of the Annenberg Washington Program, a former Fellow at Princeton University’s Woodrow Wilson School, and has been a Mary Switzer Scholar.

Story in the Public Square broadcasts each week on public television stations across the United States. A full listing of the national television distribution is available at this link. In Rhode Island and southeastern New England, the show is broadcast on Rhode Island PBS on Sundays at 11 a.m. and is rebroadcast Thursdays at 7:30 p.m. An audio version of the program airs 8:30 a.m. & 6:30 p.m. ET, Sundays at 4:30 a.m. & 11:30 p.m. ET on SiriusXM’s popular P.O.T.U.S. (Politics of the United States), channel 124. “Story in the Public Square” is a partnership between the Pell Center and The Providence Journal. The initiative aims to study, celebrate and tell stories that matter.

About the Burton Blatt Institute
BBI reaches around the globe in its efforts to advance the civic, economic, and social participation of people with disabilities, with offices in Syracuse, NY, New York City, Washington, D.C., Lexington, KY, and Atlanta, GA. BBI builds on the legacy of Burton Blatt, a pioneering disability rights scholar, to better the lives of people with disabilities. For more information about BBI, visit: https://bbi.syr.edu.