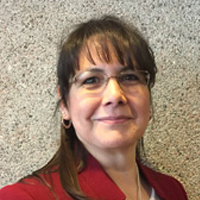 
Diana has served as Business Manager for the Burton Blatt Institute (BBI) at Syracuse University since 2008 and as Director of Operations since 2011. In this role, Diana manages BBI’s annual budget of approximately $6 million, including external grants and contracts, federally funded projects, and gifts and endowments. In addition to overseeing the day-to-day operations, she manages resources for current and future goals of BBI through the development single and multi-year projections, and monitoring budget status and financial reports.

In 2013, Diana began serving as Principal Investigator (PI) of the Appellate Brief Legal Training project, a 5-year, $2.8 million dollar project at BBI. She was also the Principal Investigator (PI), on three sponsored research projects from the New York State Division of Homeland Security and Emergency Services (NYS DHSES) examining County Emergency Communications Governance and Standard Operating Procedures (SOP’s) as they relate to crisis response and engagement with traditional and non-traditional stakeholders through the Burton Blatt Institute of the College of Law.

A 1991 graduate of SU’s Whitman School of Management, Diana served as an accountant with Coopers & Lybrand LLP (PwC), Dermody Burke & Brown CPAs LLC as well as for private and public sectors before coming back to Syracuse University.  In public accounting, she worked with clients in construction, school districts, and non-profit agencies.

In 1996, Diana took the position of Controller for J&B Installations, Inc., a large commercial roofing company with offices in Skaneateles, Rochester, and Buffalo.  During her tenure at J&B, Diana not only managed financial matters, but also ensured the AIA documents, NYS DOL Prevailing Wage reports, and Certificates of Insurance forms were completed and maintained for all construction projects.

Diana’s experience in accounting for construction projects combined with her experience in school district accounting systems were capitalized on when she was appointed Treasurer of the Jordan Elbridge Central School District in 2003.  As Treasurer, Diana was responsible for financial management of over $20 million in the General Fund, as well as accounting for the school district’s Capital, Federal, School Lunch and Debt Service Funds. While at JE, Diana also wrote and was awarded a 5-year, $200,000 Records Management Grant from NYS Archives, an office of the NYS Education Department.

As a resident of Elbridge for over 20 years, Diana has been an active volunteer in her community through the PTA, PTO, as a Classroom Mom in two schools, and assistant Little League Coach.  She also took on what she considers to be one of the greatest privileges and responsibility to her community when elected to the JECSD Board of Education.  She served as Vice-President of the Board and as a member of the Audit, Budget, and Policy committees.