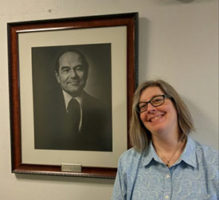 On January 1, 2019, Diane joined the Burton Blatt Institute as a Research Professor and as the Associate Director of Interdisciplinary Programs and Outreach. Diane served as Founding Director of the Syracuse University Disability Cultural Center, between October, 2011 and December, 2018. Diane has extensive experience in teaching, group facilitation, advising, mentoring, and consulting. She also has significant experience in program development and management, leadership, counseling, disability advocacy, assessment, and supervision. Diane has worked closely with people with disabilities/disabled people in non-therapeutic and therapeutic contexts, in accordance with sociocultural models of disability, since the 1980s.

From 2005 to 2011, Diane served as an Assistant Professor at SUNY Binghamton in the Department of Social Work. Diane has also worked as a Graduate Teaching Associate and Instructor of Record at the University of Arizona, and as an adjunct faculty member and graduate advisor for the Master of Arts programs at the Prescott College Tucson Center. She worked with the Tucson Youth Development Midtown Neighborhood Project and the Tucson LGBTIQ Youth Suicide Prevention Project, as well as for many agencies and organizations in the social services and activist fields in New York, New Jersey, and Arizona. Diane has worked frequently with adults marginalized by psychiatric oppression, and has also worked with seniors, children, and youth.

A founding member of the Syracuse University Contemplative Collaborative, she also serves on myriad university committees, including the LGBTQA Justice and Advocacy Senate Committee and the Disability External Review Committee. During the fall semester of 2016, Diane was appointed by Chancellor Kent Syverud as Co-Chair (with Mr. Barry L. Wells) of the University-wide Council on Diversity and Inclusion, reporting to the Chancellor; she served in that role for three academic years (until spring 2019).

A long-time proponent of inclusive and accessible pedagogy, event planning, and collaboration, Diane co-authored the Disability Cultural Center’s Guide on this subject, now used and adapted, world-wide. With Assistant Buddhist Chaplain, Jikyo Bonnie Shoultz, other members of the Hendricks Chapel team, and numerous university and community partners, Diane co-coordinates the university’s Interfaith Dialogue Dinner Series. Bonnie and Diane co-authored a chapter on the ongoing series and its goals and accessible design, for M. E. Hanshaw and T. S. Moore’s 2018 edited volume, Intersections: Faith, Church, and the Academy (Higher Education & Ministry, The United Methodist Church); the approach created at S.U. is now being explored as a model at peer institutions. In 2013, with Rachael Zubal-Ruggieri and others, Diane co-created the first-ever entirely disability-themed comic con, “Cripping” the Comic Con, which occurred annually between 2013 and 2017, then became biannual. The 2019 symposium expanded the “CripCon”’s continuous local, national, and international interdisciplinary work on disability culture, teaching, research, advocacy, inclusion, and the arts, by engaging with disabled and nondisabled artist-scholar-activists from across the globe and around the corner.

Diane has published widely in a variety of academic subjects related to diversity, social justice, inclusion, pedagogy, and empowerment, with a focus on interdisciplinarity (including feminist and queer media studies, sociolinguistic and medical anthropology, critical theory), cross-disabilities perspectives, and the Mad Pride movement. Between May, 2016 and January, 2018, Diane blogged for the Huffington Post.

Diane is the author of the poetry collection, The Golem Verses (Nine Mile Press, 2018), and of the poetry chapbook, Flashes & Specks (Finishing Line Press, 2021). Her poems also appear in Nine Mile Literary Magazine, Wordgathering: A Journal of Disability Poetry and Literature, Tammy, Queerly, The South Carolina Review, Welcome to the Resistance: Poetry as Protest, Diagrams Sketched on the Wind, and elsewhere. Diane’s creative nonfiction appears in Stone Canoe, Mollyhouse, and The Abstract Elephant Magazine; her flash fiction appears in Ordinary Madness.

After serving as Guest Editor for Nine Mile Literary Magazine’s Special Double Issue (Fall 2019) on Neurodivergent, Disability, Deaf, Mad, and Crip Poetics, she was appointed Assistant Editor for the magazine. In 2020, Diane became the Editor-in-Chief of Wordgathering: A Journal of Disability Poetry and Literature, made possible through a partnership between BBI’s Office of Interdisciplinary Programs and Outreach and the phenomenal team at the Syracuse University Libraries.

Diane teaches undergraduate courses for the Renée Crown University Honors Program. She also regularly offers Universal Design for Learning (UDL) workshops via different venues, on- and off-campus, including for the Future Professoriate Program’s Certificate in University Teaching series, hosted by the Graduate School. Diane presents and consults on the subjects of disability justice, cultures, identity, and pride; UDL and inclusive pedagogy; accessibility and ableism; and other topics related to oppression and marginalization, in order to advance equity, engagement, and belonging.